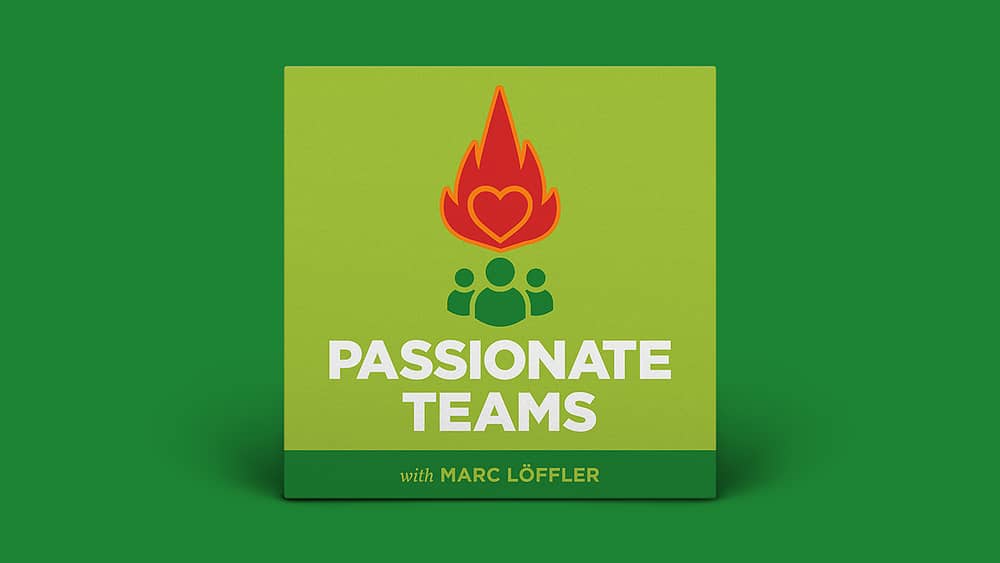 A passionate team can be recognized by the quality of the product or service they provide. They create something that creates value in the world, not just a product.

I would say that you can’t look for passion by looking at the team. When you look at the outcome of their work, at the quality of the product or services that the team produces, as seen by their customers, you will know if it’s a passionate team. You will know it because passion exudes in the product, the outcome or the final deliverable that comes out of a passionate team. You will see it in the quality of the products that they produce, and just before we started recording, we were talking about two different kinds of microphone, right? The one that you are using right now, which sounds awesome. And another one, which is driven by what I would call a marketing focused American company who doesn’t understand the use of their technology. […]

Well, it doesn’t need to be easy to use, necessarily, it depends on what kind of product we are talking about. But in the case of a microphone that is used for recording in a, like for example the microphone that I’m using, it’s used for recording anywhere. It’s not used for recording in a studio, right? So you need to deal with all kinds of other sound problems. And you see that. People are actually thinking about how the product is going to be used, and they transfer that into the product itself. It doesn’t need to be an easy to use product. It can be a very complex, I don’t know, spectrometer, or whatever. It doesn’t need to be something that is easy to use. But it clearly helps the people using it to solve a real problem that they have. And it does solve very often in ways that are very hard to replicate, because they required a lot of passion to develop that kind of a product.

In most passionate teams, there is constructive conflict, where ideas are the focus, not the people.

[…]Well, actually, in my experience, the best teams I worked with, there’s conflict. And sometimes, when you’re an outsider, you might even think that they are fighting with each other, but they are not. What they are trying to do, the process they are going through, is this constructive conflict whereby ideas are the focus of their discussion, not the people. It’s not about your idea vs. my idea. But it’s about multiple ideas, and which one should we try, and how to we develop it, so in the end, out of those conflicts emerged other ideas that no one in that meeting or conversation ever thought about before, but they were developed and further improved with multiple perspectives, and together as a team, they created something new. So this constructive conflict is definitely one of the most important things that I would say you would see in a high-performing or a passionate team, if you will.[…]

Passionate teams work in an environment, where diversity can be expressed. When they argue, they learn, as they have to express their unstated assumptions.

[…]I would say that a team, if it’s more than two people, and even in two people, that could happen, a team is a complex social system. And in my experience, you can’t remove diversity from a social system. What you can do is that you can quench it, you can stop it from emerging. And this is very much done, I’m thinking about Germany, the country we both lived in, you still live there. Where the opinion of the boss is always the one that matters. And that’s one way to constrain a social system, in order to create order, there’s a reason for it, but that does not remove the diversity in those teams, it just stops it from being expressed. And I would say that in passionate teams, there is an environment where diversity can be expressed, where it’s okay to disagree, and actually in fact we look for opportunities for disagreement, not to fight, although it might look like fighting from the outside, but rather to learn. And when we get into a discussion and we start arguing even, when we put arguments, then we learn, because we have to express unstated assumptions that we had. And we have to listen to other assumptions that may be different than ours. That’s my hypothesis, at least, that you can’t remove diversity from a complex system. You just need to find ways to let it emerge.[…]

Passionate teams don’t accept external constraints. They embrace them and then they change them. They own the way they are working.

[…]And actually, there’s one perhaps another characteristics of a passionate team, is that they don’t accept external constraints, they embrace, but then they change external constraints. Like for example, in this particular team that I was working with, we introduced Scrum. And in Scrum, there’s this thing that, you know, you do the sprint planning in the beginning, and then you do the planning poker and so on. And this team just stopped estimating. They took in the Scrum constraint of doing the planning and the estimation and so on, and then at some point they decided, hey, this is not useful for us anymore, we’ll stop it. Another thing that they did is that they had the Jira board, where they had all of the stories that they were working on, and at some point they said, this is not useful for us, we should use a physical board. They were collocated, so that was easy for them, and they started using a physical board. And then later on, we changed rooms, we went to another room in another part of the building, and they designed the room themselves. And the room, if you entered that room, you would say, „These guys are crazy.“ It looked totally different from a normal room in that company. […]

The leader of a passionate team is constantly working on creating the environment that allows the team to express their creativity and their ingenuity every day.

[…]We have these amazing examples of companies that delegate the decision about making the customer happy to the lowest level of the organization, like Nordstrom, the department store, there’s a whole book about it, I think it’s called, „Radical Management“ by Steve Denning, where he talks about putting the client first or the customer first in everything we do. And the way to do that is to actually delegate the decision making to the fringes of the organization, because those are the people who are actually in touch with the „reality“ of what it is to work with clients, to be in front of clients every day when they are at work. So, for me the role of the leader is someone who enables the people who do the real work, who solve the real problems in product development, who develop the real product, to be able to make decisions.

Passionate teams do not fall from the sky. They are not an accident, they are not created by magic tools either. They are created by constant, daily endeavor, effort and reflection.

[…]Well, so, first of all, I think that you should all read the blog post that Marc published on the passion model, and hopefully at some point even the book. But that’s not enough. What I would say is that once you understand the model and once you understand those characteristics that Marc describes, then it’s time to go back to basics. Passionate teams are created on the day to day practice of creating amazing, hyper-performing, really passionate teams. Passionate teams do not fall from the sky. They are not an accident, they are not created by magic tools either. They are created by constant, daily endeavor, effort, reflection, just like the Agile manifesto says.[…]